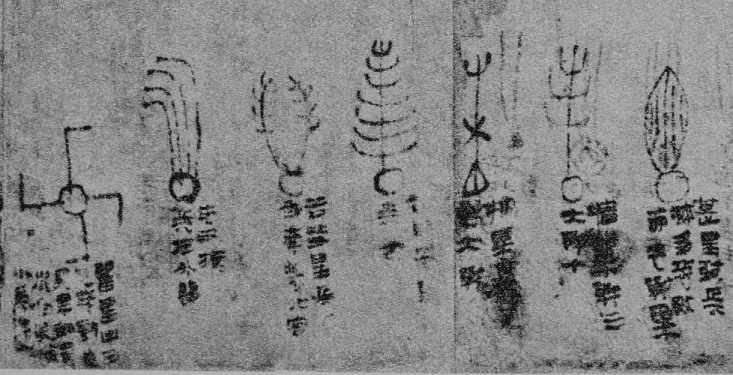 'The hall was filled with lovely ones
Yet you had eyes for me alone.
Riding a whirlwind, a cloud for a banner.
Suddenly you came, hurriedly left,
And went without saying goodbye.
Grief beyond grief are life's separations.
Joy beyond joy are new friends.
I bathed with you in the Pool of Heaven,
Under the sun I dried your hair.
Now I sing in despair under a chariot canopy
Of peacock-feathers and kingfisher-blue flags,
You climb again to the Ninth Heaven.'

The Ancient Chinese kept meticulous records of the apparitions of comets over millennia, and although they could not then have understood the nature of comets, they comprehensively catalogued and named many different types, including one shaped exactly like a swastika. Each different type of comet was associated with the historical events of the time following its apparition, and over time each type of comet came to be understood as a portent of the sort of events with which it had become associated, usually events of a biblical nature: wars, famines, floods, plagues, etc. Hence the subject of this poem 'Small Arbiter of Destiny', written by one of China's most beloved ancient poets well over two millennia ago, is a comet.

This comet is named after its Australian discoverer. I only observed it twice, directly overhead in the constellation of Draco, near the star Arrakis (µ Draconis).

Incidentally, science-fiction buffs may recognize the name Arrakis, as the name of the fictional desert planet in Frank Herbert's science-fiction fantasy novel Dune, a sophisticated allegory of the contemporary lust for Middle Eastern oil which sadly characterizes our age. A significant science fiction film directed by David Lynch was made of the novel in 1984. As it happens Herbert took the name for his fictional planet from this star. The star herself was originally named in Arabic: Al Raqis, meaning 'The Dancer', and is one of the five 'Mother Camels', the other four making up the head of the modern constellation of Draco. The four Mother Camels surround and protect the Camel Foal, a faint star in the head of Draco, from the two Wolf Stars, in the neck of Draco. Arrakis is running over to help them.

This chart shows the relative positions of the comet for each observation.

This chart shows the position of the comet during this observation at 75× magnification, using a 6" refractor. 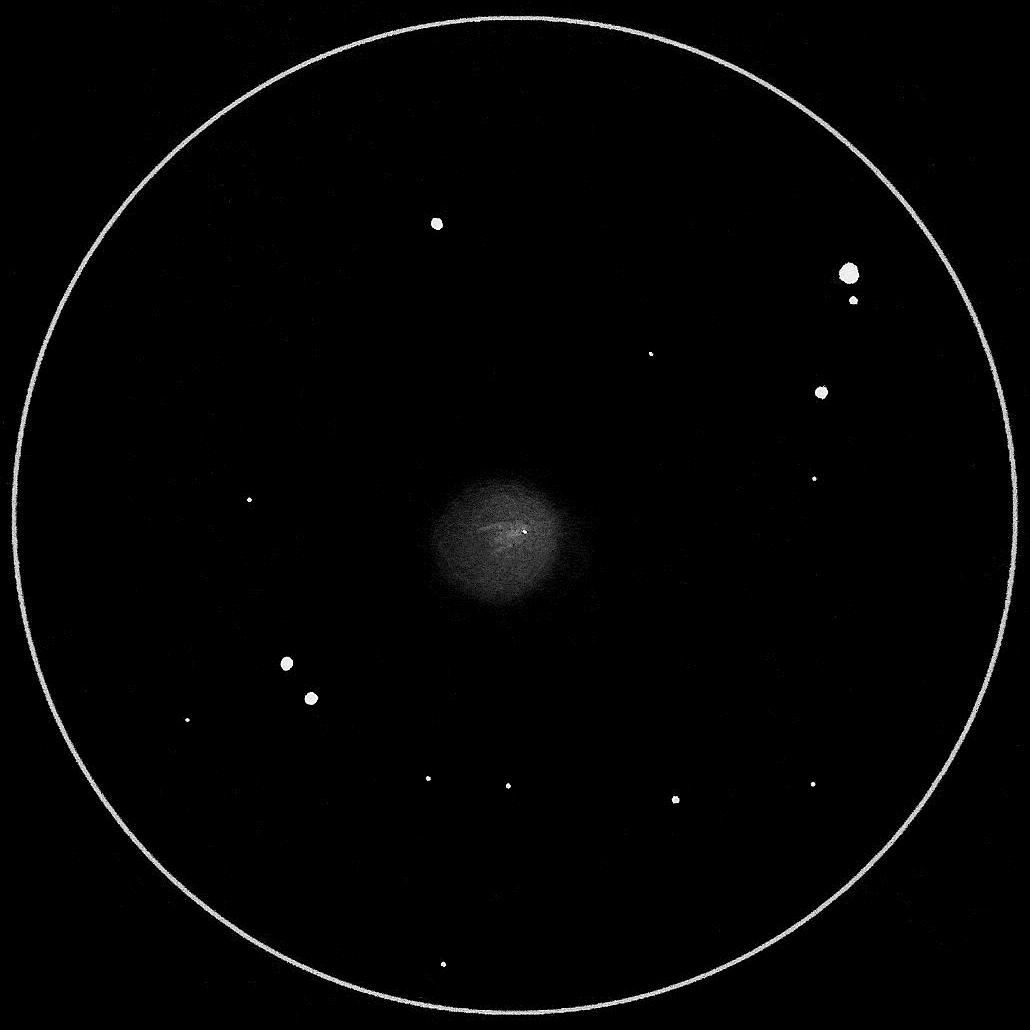 Finally this diagram shows the appearance of the comet as first sighted, at 80× magnification using an 8" specular. The image is inverted.

Comet Hartley 2 is a small short period comet that passed within 0.12AU of the Earth on 20 October 2010, and was visited by the NASA Deep Impact probe a fortnight later. It will return to perihelion in April 2017, but will not pass so close to the Earth as it did in 2010.

The chart shows the position of Hartley 2 on both the occasions that I observed him.

Twenty-six days after perigee and already I was unable to observe the comet as more than a faint misty patch, very diffuse, and merely marked his position. This is the actual chart which I used to find the comet, made using CNebulaX. 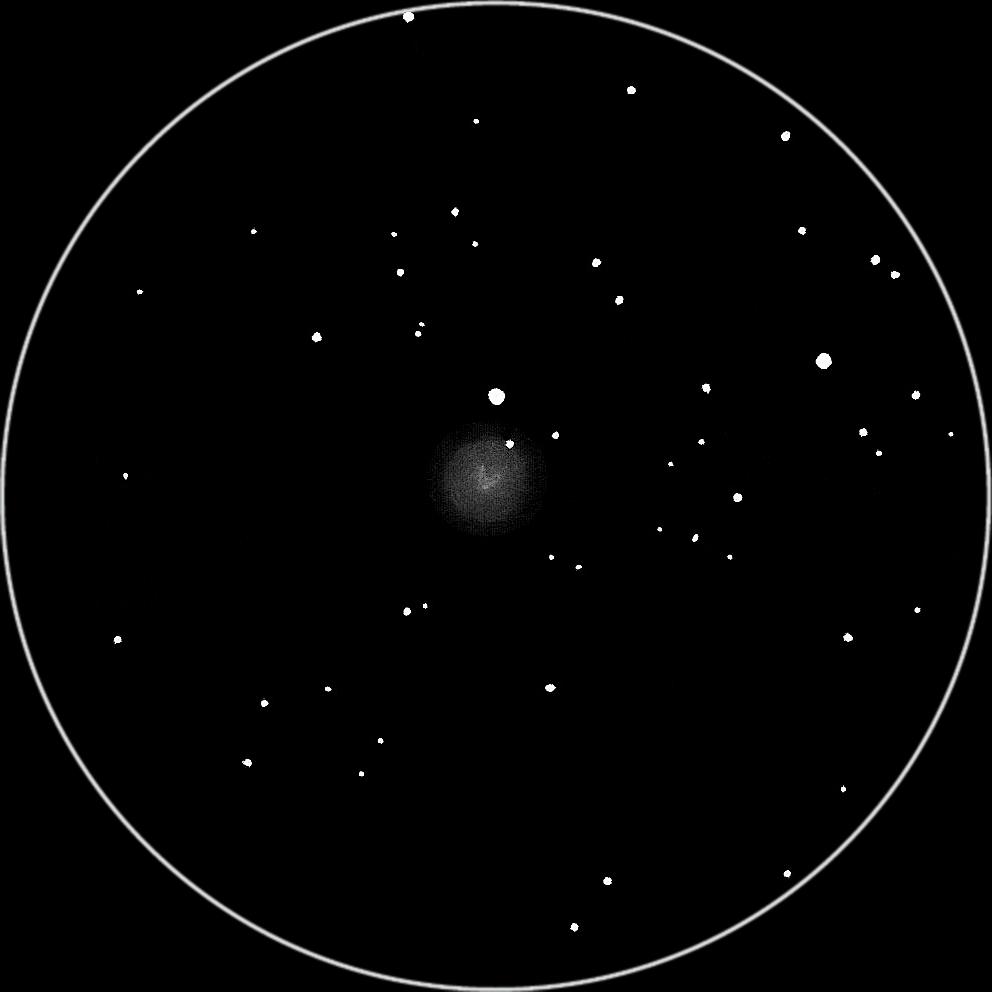 This drawing was made when the comet was at perigee.

Comet Lulin is named after Lulin University in China where the two students who discovered it were studying. My observations of this comet comprise one drawing, and a series of detailed star charts which I made using CNebulaX, tracking the progress of Comet 2007 N3 Lulin across the sky. I marked my own mini-constellations on the charts, which are illustrative of how I was able to orient myself on a naked eye star as a reference point, whilst searching for the comet.

This chart shows the relative positions of the comet for each observation.

This is the detailed star chart I used to find and note the position of N3 Lulin. [NB. the chart is inverted as seen through an inverting telescope. The line right across the chart is the ecliptic i.e. the apparent path of the Sun around the sky, marking the plane of the Earth's orbit. The widest target circle around the comet is only slightly smaller than the field of view at the magnification of ×40 which I was using.]

A hazy chilly night with occasional obscuring bands of mist, but seeing quite good; Antoniadi II.

2230 UT
My first serious attempt at comet-hunting. Comet 2007 N3 'Lulin' has been visible all month and this week is at its maximum brightness, at magnitude 4.3, about the same as the Andromeda Galaxy. Unfortunately the weather at night has been entirely overcast and dismal since I found out about the existence of Lulin in the first week of February, except for one desperate night when I came home steaming drunk and tried to find the comet with binoculars whilst looking in the wrong place by several degrees. On this occasion I was better organized, having used a library computer earlier in the day to download an ephemeris for Lulin from the British Astronomical Association Comet Section website, and borrow Wil Tirion's acme Cambridge Star Atlas from the science section. I began my search by scanning between Saturn and Regulus in Leo with 8×30 binoculars, guessing that Lulin should be a quarter of the way from Saturn towards Regulus along the ecliptic. Spent some time searching in vain; at this point Leo was in the southeast over Coventry and light pollution was a problem, although not as bad as it can be sometimes. I must write to Coventry City Council at some point and urge them to save energy by putting reflective lampshades on their streetlamps, the lamps thereby lighting up the streets rather than the heavens, whilst being less of a hazardous distraction to motorists.

2255
Set up the telescope and left it to achieve ambient temperature, and whilst waiting for Leo to move into the darker southwest, went indoors and planned my strategy for finding Comet Lulin. According to the ephemeris, at 0000 UT 25-26 February, the Comet would have coordinates r.a. 10h 41.0m dec. 8°17" (I only realized later that two sets of coordinates were given; for epoch 1950.0 then for epoch 2000.0, and I actually used the coordinates given for epoch 1950.0; in the event the difference was almost irrelevant). Looking on the chart I saw that the coordinates were nearest to the bright star ρ Leonis, at the second hind foot of the Lion, and decided I would start observing from there.

2350
Returned outside and found ρ Leonis fairly easily at ×40 magnification. The pattern of the three stars ρ, then 49X Leonis to the southeast, then 48 Leonis further south, was an invaluable marker. I spent some time studying the area through binoculars, eventually deciding to put the finderscope on ρ, find 49 in the main field, then track east parallel to the ecliptic. As I did so, I discovered, memorized, and then followed a convenient long line of nine stars, broken in the middle.

2359
With my coordinates for the comet given for a 1950.0 epoch star atlas whilst I was using a 2000.0 epoch atlas, the comet did not come into view as soon as I might have expected as I haphazardly followed the line of stars. I had just reached HIP52387 at the end of the line and was about to become lost, when to my great satisfaction I discovered a fairly large bright circular nebulosity, fading towards its perimeter, and could not restrain myself from exclaiming: 'Eureka!' This was my first comet then, a loosely-packed dirty snowball perhaps a couple of miles across, plunging into the inner Solar system for the first and only time, evaporating in the Solar wind as it does so. Undoubtedly Lulin will never be seen again.

0000
A streak of mist obscured the view; I wondered ruefully if the sky was not about to fog and cloud over again as it has done every evening for a fortnight now; I might have to content myself with just that one glimpse of the comet before it swung around the Sun and back towards interstellar space forever...

0007
As it happened, the streak of mist was the only cloud cover in the sky. After almost mockingly sprawling across the constellation of Leo, entirely obscuring the one part of the sky that I needed to look at, it sat there apparently motionless for a few minutes, before finally moving on. I put in the nebula filter and the comet brightened and a small number of faint stars became visible that I could not see through the thin light-polluted haze. Rather than study the comet in detail I began to sketch its position relative to the neighbouring faint stars, believing that to be the most important astronomical information to get down before drawing pretty pictures of the thing.

0025
Completed my rough diagram of the comet's position.

0028
Increased magnification to ×80. No more or less detail apparent, little more than a fuzzy blob. Discerned a tiny central star-like point, within a small irregular pool of light like an out-of-focus star photographed by a slightly wobbly camera. This was surrounded by an obvious flattened circle of light, and an extensive halo beyond that, fading to the black. The more extensive regions of this halo proved to be illusory; at first I imagined that they appeared to be blowing in the opposite direction to the Solar wind. There was no apparent tail.

0034
Another patch of mist obscured the view.

0040
Looked for the comet with binoculars, using the constellation of ρ Leonis, 49 Leonis, and 48 Leonis, and found it easily, a fuzzy patch west of 49. Certainly the use of averted vision made the comet more apparent, and the surrounding stars; I quickly became quite familiar with this area of the sky and noted the position of the comet as seen through binoculars. Tried to observe the comet by eye alone, but through the murky urban sky, with lights still on in neighbouring houses, could only make out ρ Leonis.

0051
Reverting to ×40 magnification, made an estimate of the diameter of the comet, as being approximately the same as the distance between the nearby stars HIP52387 and HIP52350.

0059
Finally got down to systematically observing detail in the comet. Having familiarized myself with and mapped out the comet's environs, I now had Lulin pinned down in the centre of my field of vision and no longer saw it as merely a fuzzy patch. Peering into the nucleus, I noted a bright patch like two stars conjoined, and then I noted a slight variation in brightness in the surrounding circle of light, which had very faintly darker streaks to the west, sweeping a 70 or 80° segment of the circle between them. The wider halo, which was more or less circular and extended further than I had previously decided, may also have had a slightly fainter segment to the east. Made two rough sketches from which to make a proper drawing.

0113
Ended observations. Comet Lulin has now passed its maximum predicted brightness, whilst the weather forecasts of late have been consistently gloomy, and this particular clear spell was not forecast. It may be some time before I am able to observe Comet Lulin again, and by that time - unless it does something spectacular on this its only journey into the inner Solar system (like break up or send out a jet of evaporating gas) – Lulin will not appear nearly so striking, indeed it will never appear so striking again. 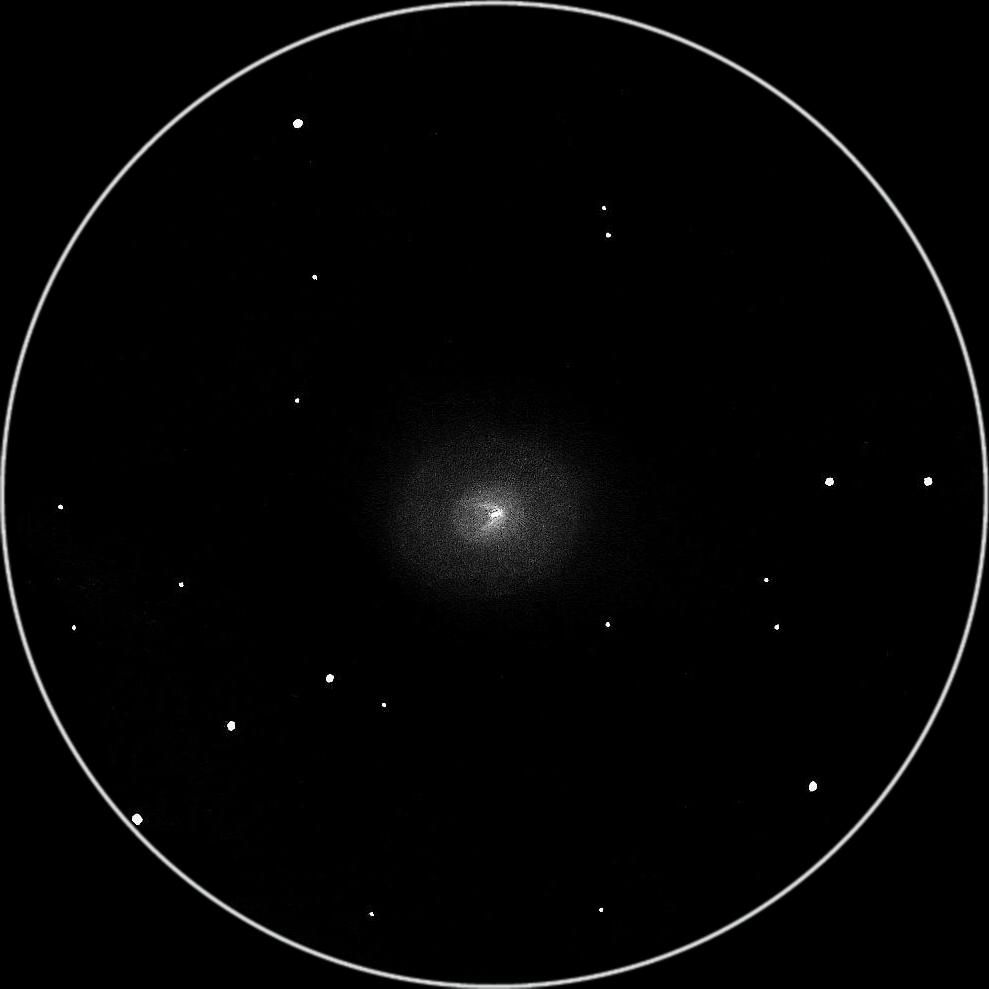 You may leave now if you really must. Or you could return to the index page instead.