By the time of the 2011-12 apparition of Mars, I had grown entirely confident in my experience and equipment for the purpose of making meaningful planetary studies. At this time I had already studied Mars over two apparitions, the last time making thirty-seven drawings between 2009.XI.17 and 2010.IV.20. I had also acquired a 6" f/5 achromatic refractor, which, whilst being of short focal ratio and having optical fixtures of low quality, with some tampering, cloth tape and cereal packet shims, proved to be an excellent instrument for planetary observation. The home-made motorized focuser which came with the instrument was especially useful once the eyepiece holder had been straightened.

As such, over the course of the 2011-12 apparition of Mars I was able to assemble my most detailed drawings and photographs of that planet to date, and monitor the full range of atmospheric phenomena visible over the course of a Martian northern spring. The deterioration of the north polar hood was plain to see and is charted in my drawings, as is the increasing cloud cover, moving down from the polar regions to the equator as the NPH sublimed into the atmosphere in the spring Sunshine. I was also on separate occasions able to make out clouds over the great volcanoes of the Tharsis plain, which was most gratifying. There was also some excitement over the course of this particular apparition, when the Mars Section of the British Astronomical Association issued an alert to Mars observers in April 2012, in response to sightings of trans-terminator high altitude clouds in the Electris/Eridania region. CCD images clearly showed a cloud beyond the illuminated edge of the planet, surrounded by darkness in the 4 or so per cent of the disc that was in shadow at the time. The view from the surface after nightfall must have been unearthly even for Mars. For a while speculation abounded, the most fun explanations being that Mars had experienced its first volcanic eruption in a million years, or that the cloud was H. G. Wells' mythical puff of gas signaling the launch of the first Martian Cylinder at Earth! The Section Director finally calmed things down by pointing out that a similar phenomenon had been observed and documented by Antoniadi in 1938. Finally it was assumed that this was a freak high altitude Martian cloud, at least 35,000' above the surface. Perhaps it was akin to Earthly noctilucent clouds, whose nature is not understood even here on Earth, although they are suspected of being water droplets fixed to high altitude meteoric particles. Perhaps on Mars ice crystals cling to fine dust in the high atmosphere? In any case, I was unable to observe the cloud myself, despite trying to follow the region the next time it was available on the terminator. But the excitement it had caused was fun.

I saw fit to submit my report to the B.A.A. on the recommendation of the local astronomy society, to whom I had shown a selection of my observations of Mars, which had met with universal approval. Finally the report itself earned me a handwritten letter of congratulations from the Director of the Mars Section. The only negative was that I was only able to supply twenty-seven drawings, owing to frustrating weeks of overcast preventing my observing. But all in all this was a very exciting time and my most rewarding round of planetary observation to date.

The graph shows the changing distance of Mars from Terra over the course of the apparition, each point showing the date of an observation and the corresponding distance of Mars. The first two observations were speculative, and it was not until mid-November 2011 that it was judged that observations might be useful. The gap in observations during December was mainly due to a cold. The gaps thereafter are almost entirely due to unseasonable overcasts lasting weeks at a time. After the final observation in June 2012 it became impossible to observe Mars from this location due to intervening ground structures. [Note that the graph was drawn on a 1983 Acorn Electron microcomputer. Neat, huh.]

This diagram shows the position of Mars relative to the background stars during each observation.

This diagram shows the relative observed apparent diameter of Mars during each observation. 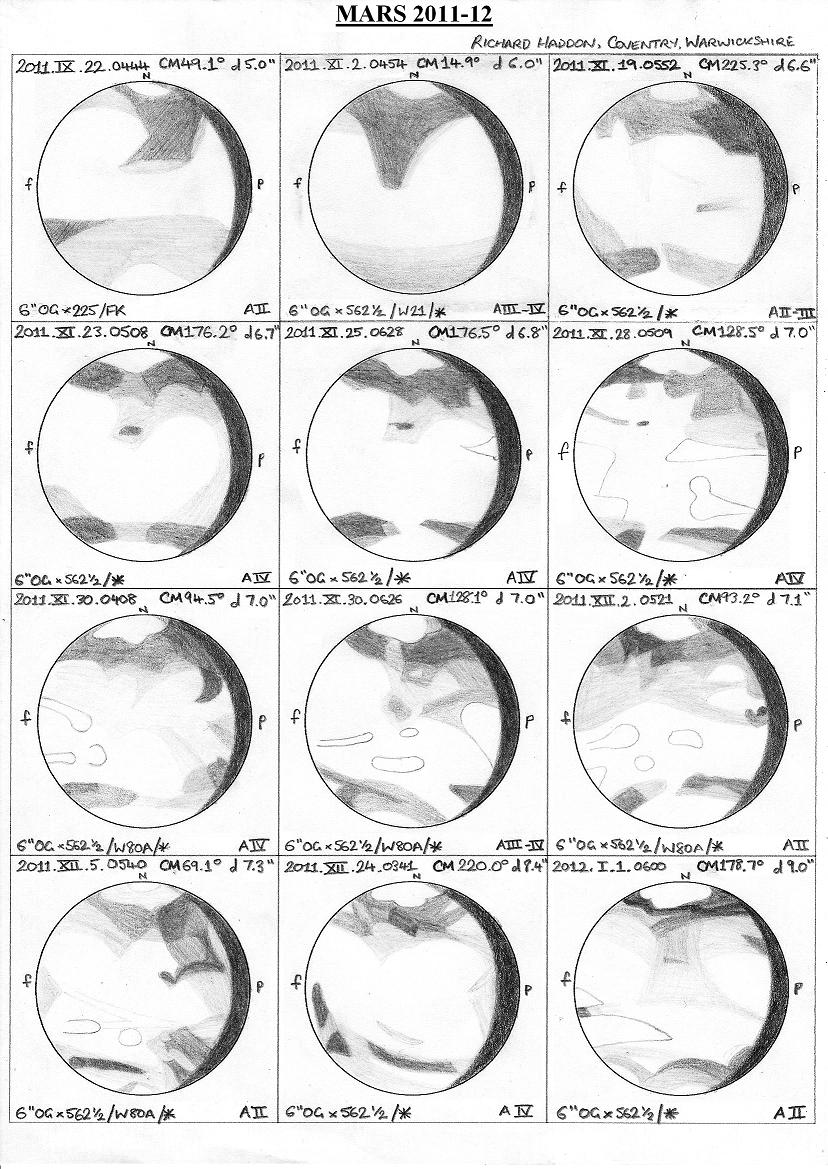 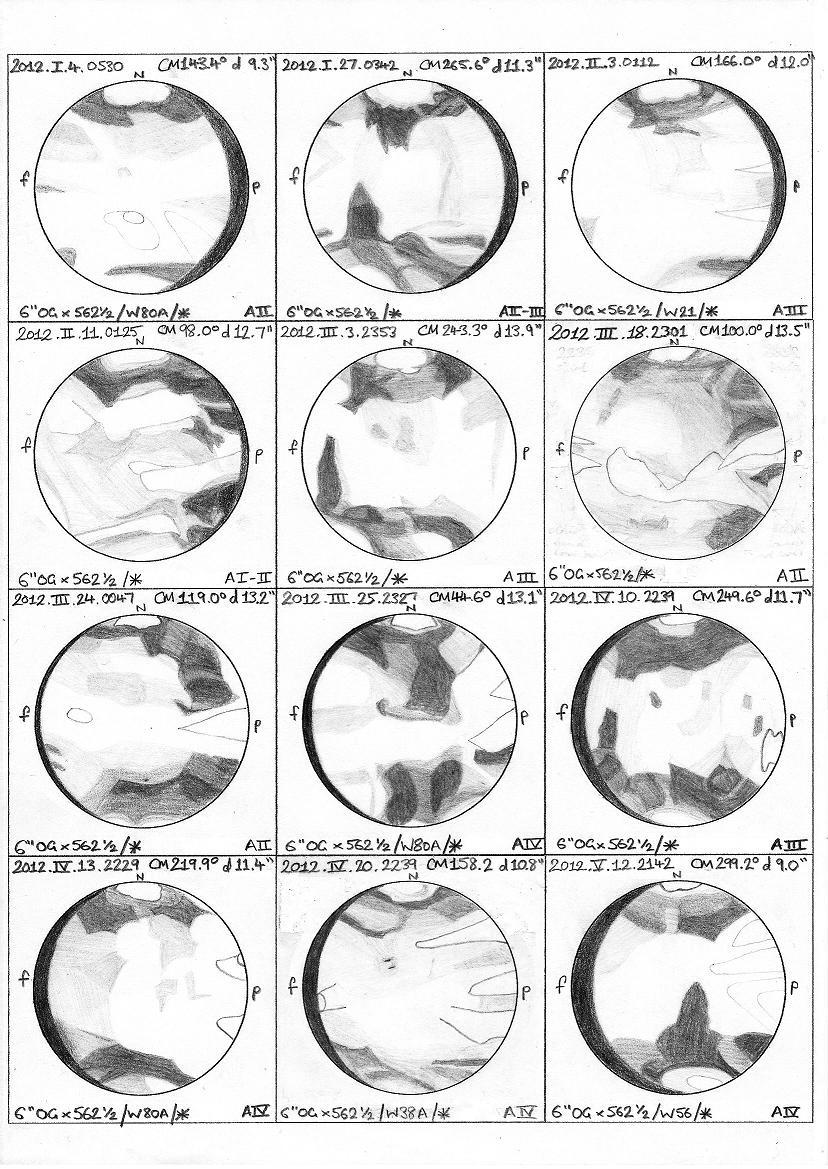 Click on the panels to enlarge each page of drawings.

A global map has yet to be produced from these observations, but should be ready before the start of the 2013-14 apparition.

Return to the main Martian page by clicking here.