'A willing heart adds feather to the heel, And makes the clown a winged Mercury.'

Mercury, superficially not unlike the Moon but half as big again, orbits the Sun more closely than any other planet. As such he is never very far from the Sun in the sky, making him awkward to observe for any length of time. What is more, he never approaches much closer to the Earth than 50 million miles, and unless he transits across the face of the Sun he is invisible even then since only his shadow is visible. Mercury is therefore only observable in his partial phases, when his small size and great distance make him impossible to see in any great detail. The elusive little world orbits the Sun every eighty-eight days, and is aptly named after the fleet-footed Roman messenger of the gods, identified with the Greek god Hermes, portrayed with round hat, herald's staff and winged golden sandals.

In my poor location, the only opportunity to observe Mercury is through an iron fence backed by chicken wire, underneath evergreen foliage and over distant rooftops, for one fortnight a year at dawn for about five to twenty minutes. Nevertheless, I have so far managed to obtain one image of the planet fairly typical of amateur astronomers. 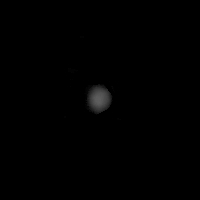 So there it is. My image of Mercury. South is top. Certainly I could improve on it. Some dark features are apparent if you look closely, but these are almost certainly spurious. I have no idea what Mercury's orientation is, but if the 180° meridian is facing in the image, then the lower of the dark features to the right of the disc might correspond to the Solitudo Phœnicis. But then the Solitudo Phœnicis itself is a feature on pre-Space Age maps which were so inaccurate that they were abandoned altogether, along with their nomenclature, as soon as the first space probe sent back close-up pictures of the planet. Still. The phase is apparent. The Sun is to the right. Mercury, only 3,000 miles across, was over 100 million miles distant and subtending an angle of only 6 arcseconds when I took this image, through a chicken wire fence with the planet only 11° above the urban horizon and dawn breaking all around.

Since the turn of the century, water ice has been discovered in dark polar craters on Mercury that never see Sunlight, like the water ice at the south pole of the Moon.

Or you could always go back to the index page.