'Truly the light is sweet, and a pleasant thing it is to behold the sun.'

I first started to observe the Sun because I took to using him as a marker by which to find the planet Venus in broad daylight, some years after I began using a telescope. The crucial thing to always remember of course (and everyone always has to say this because one never knows who might be reading) is to NEVER LOOK DIRECTLY AT THE SUN THROUGH A TELESCOPE, AS INSTANT AND IRREVERSIBLE BLINDNESS WILL RESULT. In fact if you try even holding your palm behind the eyepiece whilst pointing the telescope at the Sun, within a second you will have to pull your hand away in pain or receive a small burn. So putting your eye to the eyepiece would burn out your delicate sensitive retina fairly instantaneously, and agonizingly. Filters are no good either as they often transmit infrared light which burns out your retina without your even being able to see it. I won't even trust the dedicated solar filters that fit over the end of a telescope with my eyesight; anything could happen; a naughty little bird might peck a hole in it whilst you're looking through it, anything. It's not worth the risk. That said, I will trust a CCD camera with a Solar filter, and have made such a filter myself for my 4" o.g. out of cereal packet, PVC tape, and a 10cm square of Baader AstroSolar Film which I bought on ebay for £3—50. And SUPER-STICKY GLUE. The results can be seen below.

To conduct visual observations of the Sun, the usual way to avoid eye damage is to hold a card behind the eyepiece and scrutinize the resulting image of the Sun which is projected onto it. Often people build a hands-free frame which holds the card to the eyepiece, personally I run the eyepiece through the front of a cardboard box on the back of the telescope, with one side cut out so that I can observe the Sun projected on the bottom of the box. A prominent warning not to 'stick your head into the box' is written on the box in black marker pen, and on the back is a representation of the Sun with the words: 'HAVE A NICE DAY!'

A couple of other points to remember are that first, reflectors are not usually safe for Solar work as their secondary mirrors overheat and can explode. Second, unless you keep the Sun entirely within the field of view so that all Sunlight passes through the eyepiece lens, any Sunlight to the side of the field will sear the lens housing and quickly melt and burn any plastic components, eventually setting fire to them. You can buy more expensive all-metal eyepieces, or do as I did and fix a 30mm zinc washer to the bottom of the eyepiece. With SUPER-STICKY GLUE.

Having recently built a Solar filter, I was keen to test it with the CCD camera. 2013.IV.2 was the first clear opportunity to so do presented by the weather, and I singled out Sunspot Group NOAA#1711 to follow around the Solar disc. The days became increasingly cloudy as the group moved towards the eastern limb, and by 2013.IV.11 observation was impossible, and I missed the group actually leaving the disc. Nonetheless I captured lots of images: 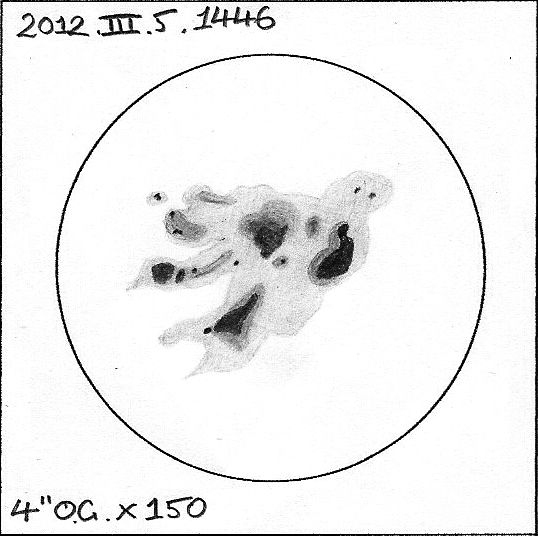 Sunspot 1302 was the largest sunspot group to appear on the Sun for some years, the star having been strangely quiet throughout the last expected period of maximum activity. It was also the first sunspot that I studied more than once, struggling with Terrestrial cloud cover for most of the observations.

The following photograph taken from the ESA/NASA SOHO spacecraft shows the positions of the sunspot groups on 29 September 2011.

There is nothing more to see here. Please move along to the index page. Move along now please, there's nothing to see.